Asparagus and a fine weekend 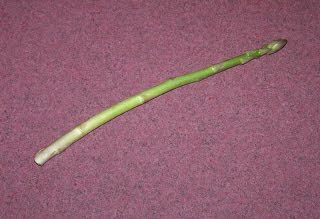 It is now the start of the third year the after planting of our two asparagus crowns and we have reaped our first harvest. The total first crop is illustrated in the accompanying photo.

There is another spear on the way, but it’s not quite ready to cut. Hopefully it will be ready soon enough to prevent arguments over who gets to eat. A second spear would at least give us one each.

Saturday and Sunday were the first fine weekend we’ve had for some time and I was able to get a few things done. However I didn’t get round to weeding a narrow garden alongside our boundary fence. It is getting quite overgrown with a healthy crop of low growing weeds. If only the veggies thrived as well.

Maybe I’ve been bit too optimistic, but I planted out two Roma tomato plants. I’ve given them a little protection with plastic guards in case we get another frost. One of the unfortunate things of our location is the unexpected frosts, which often come in October and even into November. So any planting of frost tender plants has an element of risk. But the alternative is leaving planting until very late Spring or early summer.

I also sowed seeds into a few punnets.
I’ve had very little success with growing from seed. In the past pumpkin, Zucchini and beans have done very well. Onions have also succeeded. But everything else has been very hit and miss. On Saturday I sowed some Rhubarb and Asparagus as well as some ornamentals: Penstemon, Larkspur and California poppies. To (hopefully) improve their chances I’ve placed them in a temporary “green house” made out of an upturned plastic storage box.

It’s now been a couple of weeks since the shed was built and I’ve moved the mower, mulcher and kettle barbecue into it. That has given me a lot more room in the garage. I haven’t totally solved the problem of the leaks, but I have an idea where some of the water has been getting in and I’ll attempt to fix that before too long.

I did notice one little pool of water yesterday that had no logical source. I checked all around the concrete outside the shed, I checked the walls, and the roof and the pool seemed to have no source. The only conclusion I can draw is that it’s coming up out of the floor itself.
Posted by Onesimus at 9:05 am

Onesimus
Country Town, NSW, Australia
A man of diverse obsessions. I tend to jump in boots and all, often ignoring the sense behind the proverb: "Look before you leap".