Close Encounters of the Bird Kind 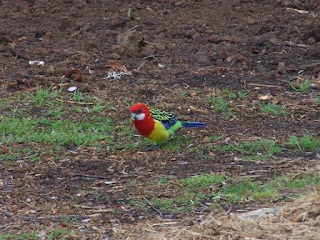 Since moving to the country over two years ago I’ve kept a record of the identifiable birds that I’ve seen from our house and garden. I’m quite impressed with the variety and surprised by some the visitors we’ve had.

In no particular order:

Pacific Black Duck – The dam at the nearby retirement village seems to be the attraction for ducks, and they are quite commonly seen flying overhead in pairs but it was a bit surprising to see them walking around our garden. I saw one pair in the back garden possibly a year ago; I’ve since seen another pair walking across the front.


Brown Goshawk – I caught a glimpse of a suspected small bird of prey emerging from the wonga wonga vine growing above our side fence. Several months later a group of birds chased a similar bird across the garden only a metre away from where I was standing. After checking the guidebook it seemed there were only two possibilities – a sparrowhawk or a brown goshawk. They were the only birds matching the size and the markings across the breast. The goshawk seemed to be the most likely candidate considering it seems more common in my area than the Sparrowhawk.

Masked Lapwing – I saw and identified these birds in the grounds of the nearby hospital as I was driving past. I quickly returned home and viewed them from the edge of my front garden to make them eligible for this list.

Crested Pigeon – These are some of our most common visitors and they’ve nested in a couple of our trees. Their “nest” is a small and flimsy looking platform built from small twigs and grasses. Its amazing how their eggs and young remain secure for long enough to hatch and reach maturity.
They are often heard flying around with their distinctive whirring sound and their courtship dance is quite entertaining as is their clumsiness on landing.

Galah – These often roost in trees near the retirement village. Clouds of them swoop overhead throughout the day. They bring to mind the flocks of seagulls that were common when I lived near the coast.

Sulphur Crested Cockatoo – Usually heard before they are seen. Most of the time a solitary bird will fly over head and I can’t recall seeing any large groups.

Superb Parrot – We’ve had only one visit of these parrots. A group of three landed in our neighbours wattle and stayed long enough to have their photos taken. 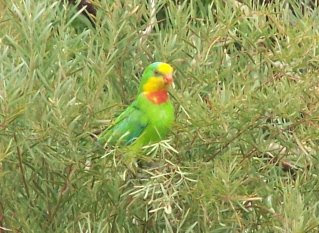 Eastern Rosella – A pair are occasional/regular visitors.(see top of article)

Red Rumped Parrot – a small flock visited for a few days, inspecting the front and back lawns. But after those few days we haven’t seen them again. 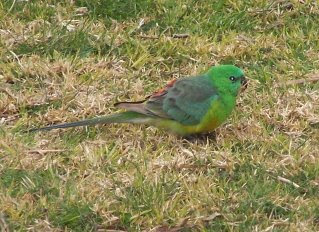 Superb Fairy Wren – a constant visitor. So far this year we have one pair that appears to be nesting in bushes across the back fence. They spend a lot of time around our compost bins and in the veggie patch. The hen is particularly bold and often hops around within a metre or two of where I’m working. The male has also been seen investigating its own reflection in the back windows of our house. 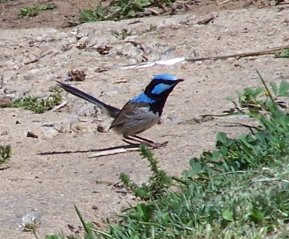 Red Wattle Bird – one of my favourites that I grew familiar with in Sydney. I can recognise these from a distance now by the way they glide around and also by their raucous cry. They are regular visitors to our grevillea bushes.

White Plumed Honey Eater – This is the first new bird I saw from our property. I was lucky enough to get a clear enough photo to allow me to identify it from a guidebook. They have a very loud song for their size. Not long after we first moved in I found a baby on the ground and tried to pick it up and move it to the safety of some bushes. Its parents aggressively swooped at me trying to protect it. Unfortunately it struggled from my hands and slipped behind the fence. The parents and the chick were calling to each other for hours afterwards.
Just a few days ago I found another young one huddled against our front window. I picked it up and it was able to fly the short distance to a nearby melaleuca. Later I heard some adult birds calling from across the road. I suspect they are nesting in trees over there – and the young bird made an early attempt to fly, only managing a downhill journey to our place. It had only recently been fed because its crop was quite full. 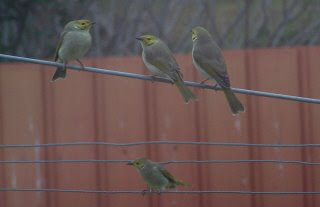 European Goldfinch – only seen in the early days when the garden was still a bit neglected.

Australian Pelican – perhaps one of the biggest surprises considering there are no sizeable bodies of water around – but the continuing drought has sent many bird species out looking for more promising habitat as their natural homes dry up. Probably this bird was merely passing through and investigating the retirement village dam on the way. The dam at that time was well depleted and would have been no incentive for the pelican to stay.

Common Black Bird – Common IS the word. They are ever-present throughout our garden; scattering mulch everywhere and excavating the garden beds in search of worms. At times they almost uproot well-established roses as they dig all around. They are very annoying pests in the garden – but they try to compensate with their singing.

Silvereye - my first encounter with these birds was unexpected. I was watering the roses when a group of silvereyes swooped across and started darting from bush to bush less than a metre away from me. They showed no concern at all about my presence. 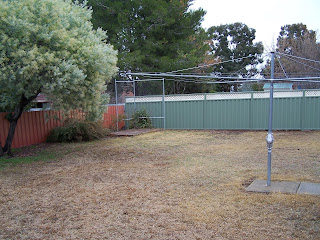 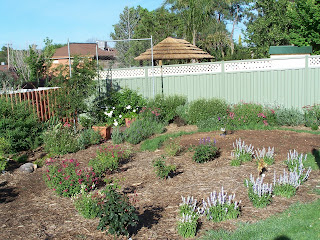 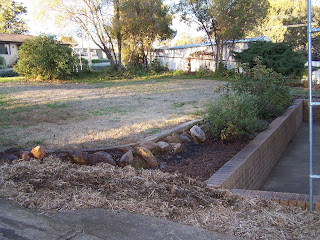 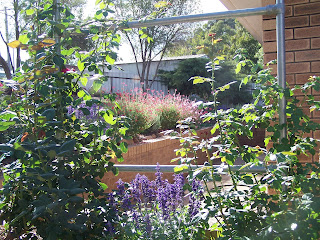 Posted by Onesimus at 1:20 pm No comments: It’s now over a year since I started on the garden. Progress has been slow and not everything has worked as I hoped.

Somehow the yard shrank. What seemed to be an overwhelming amount of land to fill with plants quickly became too small to accommodate all of the things I would like to do.

Unfortunately the block is wide but not very deep. The house is perhaps set too far from the road, giving us more front garden than back. And I can’t do a great deal with the front because most of it is needed to give driveway access to the side of the house.

One of the failures has been the garden of Aussie natives. This was more or less my first project after moving into the house. Most things remain stunted. I didn’t give them enough depth of soil to get established and there’s too much hard clay under the surface. It seems like I’ve developed a native bonsai collection.

The roses I planted at the front of the house are having mixed success. All of the books tell me that roses need 5-6 hours of sunlight per day; but they didn’t say that too much direct sunlight isn’t very helpful for the flowers. These are in direct sun for most of the day. Almost as soon as they open, many become discoloured – or dried up.
The biggest disappointments have been the Red Pierres. These red climbing roses develop massive clusters of buds – most of which turn brown before they even open. It’s only now, at the start of autumn that we are getting some good colour in the blooms.
Our Double Delights have been anything but delightful. They seem to develop one problem after another and the flowers have been few this season. I am thinking of transplanting them over winter – if I can find a more suitable spot for them.

The back garden is looking more promising. We trucked in a few loads of soil to give a decent depth of raised garden beds above the clay. This area has become a mix of natives and exotics. Most things seem to be thriving – though some are thriving too well. Everything now seems to be planted too close together and the salvias are taking a lot of work to keep under control. Most of the salvias seem to be “Hotlips” which according to the illustration on the label should be red with white tips. However, for most of the year white seemed to be the only colour being displayed – nowhere near as spectacular as the brilliant red flowers that were our first introduction to the salvia family.

A newer area was intended to be dominated by David Austin Roses. This was another disappointment that didn’t work to plan. Two plants bought through mail order died after a few months. This wasn’t surprising because they were the most pathetic rose specimens I’ve ever seen. If I’d seen them at a nursery I wouldn’t have given them a second look. Despite the poor start, this bed is now showing a little potential. Between the roses I’ve planted a few salvias. These are a deep burgundy, a much more impressive colour than the “Hotlips”. The surviving David Austins are Winchester Cathedral, Othello, Hero, Mary Rose and Heritage. I’m not sure whether I’ll try to replace the departed Glamis Castle and New William Shakespeare with other roses, or to try something else instead.

Behind the rose garden I’m trying another area of natives. A few haven’t survived, but so far it seems to be going reasonably well. The biggest failures have been Banksias. None have survived so I’ve given up on them for now. Also a group of Correas all gave up the ghost one by one after showing a very promising start.
The biggest surprise has been a native hydrangea. It was tiny when I planted it, but only months later it’s the most dominant plant in the back yard. It has almost overwhelmed the only non-native in the area – a burgundy iceberg rose. 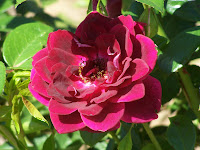 The burgundy of the rose contrasts brilliantly with the purple of the native. I had intended to transplant the iceberg away from the natives, but the colours are so effective together that I might keep them alongside and just move the rose slightly aside to give it a bit more room to grow.


The veggie garden has been a mixed success. For the second year we’ve had a good crop of butternut pumpkins. I don’t know how well I’ll go with them next year because I don’t want to devote as much area to them. I might try growing them as a climbing plant if I can make a suitable frame to support them. I’ve read that they can be suitably grown in this way.
Then again, we can’t believe everything we read. This was made very clear by the failure of my potato crop after I tried to grow them under straw as per an article I read last year. I don’t want to know how much I spent on this method. Not only was there the cost of the seed potatoes, I lost count of the number of bales of straw I had to buy to keep them adequately covered during their growing season.
We’ve had more success from one or two Ruby Lou potatoes that must have been left in the ground after last years crop were dug up.

This year’s zucchini crop didn’t seem to match the one we had last year, but it was more than enough to keep us fed. We just didn’t have as many to give away – and we didn’t need to make zucchini soup.
A big success was our first attempt at growing onions. They were Barletta onions – a mild white salad onion. The seeds germinated well and most of those transplanted matured into good size onions. I’ve now sown the remaining seed from the packet into punnets and they’ve now started to sprout. But unless I buy more seeds, the next crop will be much smaller.
Posted by Onesimus at 4:04 pm No comments:

Onesimus
Country Town, NSW, Australia
A man of diverse obsessions. I tend to jump in boots and all, often ignoring the sense behind the proverb: "Look before you leap".